Jules Chéret (1836-1932) is often referred to as the Father of the Modern Poster. He did not invent posters, and he didn’t invent color lithography, but he invented the way color lithography is still used to make posters.

Below are two examples of posters before Jules Chéret’s time. They were black and white, stark, straighforward, and very little fun. They generally fall into the category of very old-looking.

And here are some Chérets:

Aux Buttes Chaumont, 1885. Can famously be spotted on the set of the TV show Friends, in the living room behind the television set. Bibliotheque Nationale De France, Public Domain

A short film of the above-advertised Loie-Fuller, doing her famous Serpentine Dance.

Chéret was a self-taught illustrator from Paris who discovered the process of color lithography while working in London in the late 1850s. His boss at that time was the perfumer Eugene Rimmel, whose cosmetics company is still in business today. Rimmel eventually fronted Chéret the funds to start his own color-litho printing press in Paris.

The building on Rue Bergère where Chéret’s studio was located from 1881. via Google Maps

Chéret in his studio. Dornac, via Bibliotheque Nationale de France

Chéret was the first artist to use color lithography as its own art form, rather than as a means of reproducing other works of art. He was a highly skilled illustrator of the human figure, with confident lines, and he drew his illustrations directly onto the lithographic stones. He used bright primary colors that leapt out at the viewer, making his posters visible from long distances on the Paris streets.

In Chéret’s time, the modern notion of feminism in France was already a hundred years old. However, his depictions of women were revolutionary in that they were no longer imprisoned in the home. They were out having a good time, in an urban environment, smoking, drinking, and dancing with no trace of judgement coming from the artist. Of course all Chéret’s female figures were still young, beautiful, and provocatively dressed, but this was still the late 1800’s, and he was in the business of advertising. It is also a stretch to say that Chéret’s art had a hand in liberating the women of his time. More likely Chéret was just painting what he saw, and his illustrations may have in turn served as a model for what was okay in women’s behavior, resulting in a feedback loop that may have furthered the feminist cause.

What women looked like in other people’s art from 1889. Hanging around at home, reading with one’s sister. Zzzzzz. Pierre-Auguste Renoir (Public Domain), via Wikimedia Commons

What Chéret’s ladies were doing in 1889. Wooo partying out on the town. Public Domain via Wikimedia Commons

The collection of posters brought into Fourth Cone Restoration were in varying states of disprepair. Some of them looked amazing, and some had been previously linen backed and restored.  It’s very rare to see a Chéret poster that hasn’t been previously restored, since they were collectible even in their own time, and linen backing was and still is a great way to make posters displayable in the home. Some of these posters had been mounted using an outdated technique, and the paper had begun to wrinkle because the backing was not sturdy enough to hold a flat shape.

The poster for the production of Le Miroir at the Folies Berger was removed from its old backing, washed, bleached, and then it was given a new, sturdier linen backing before finally being fully re-restored. 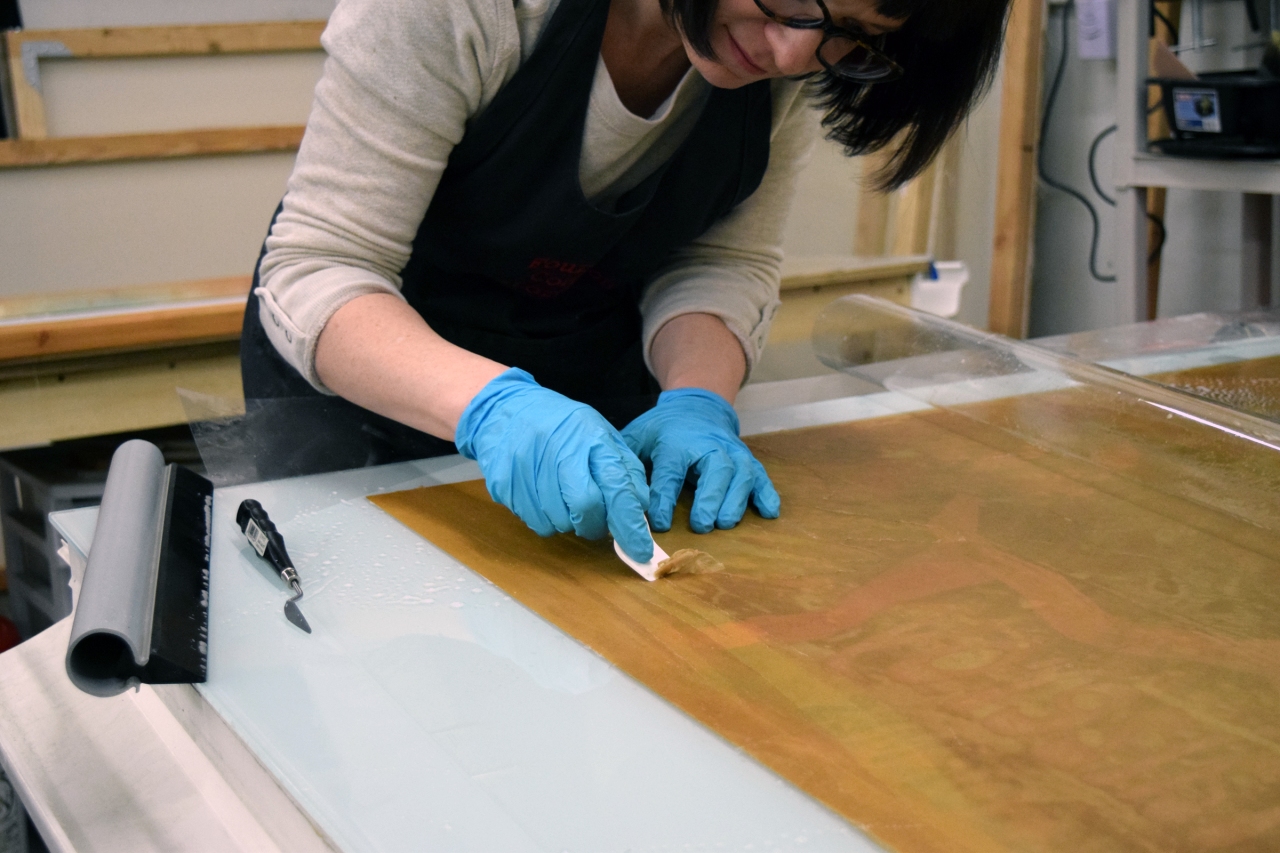 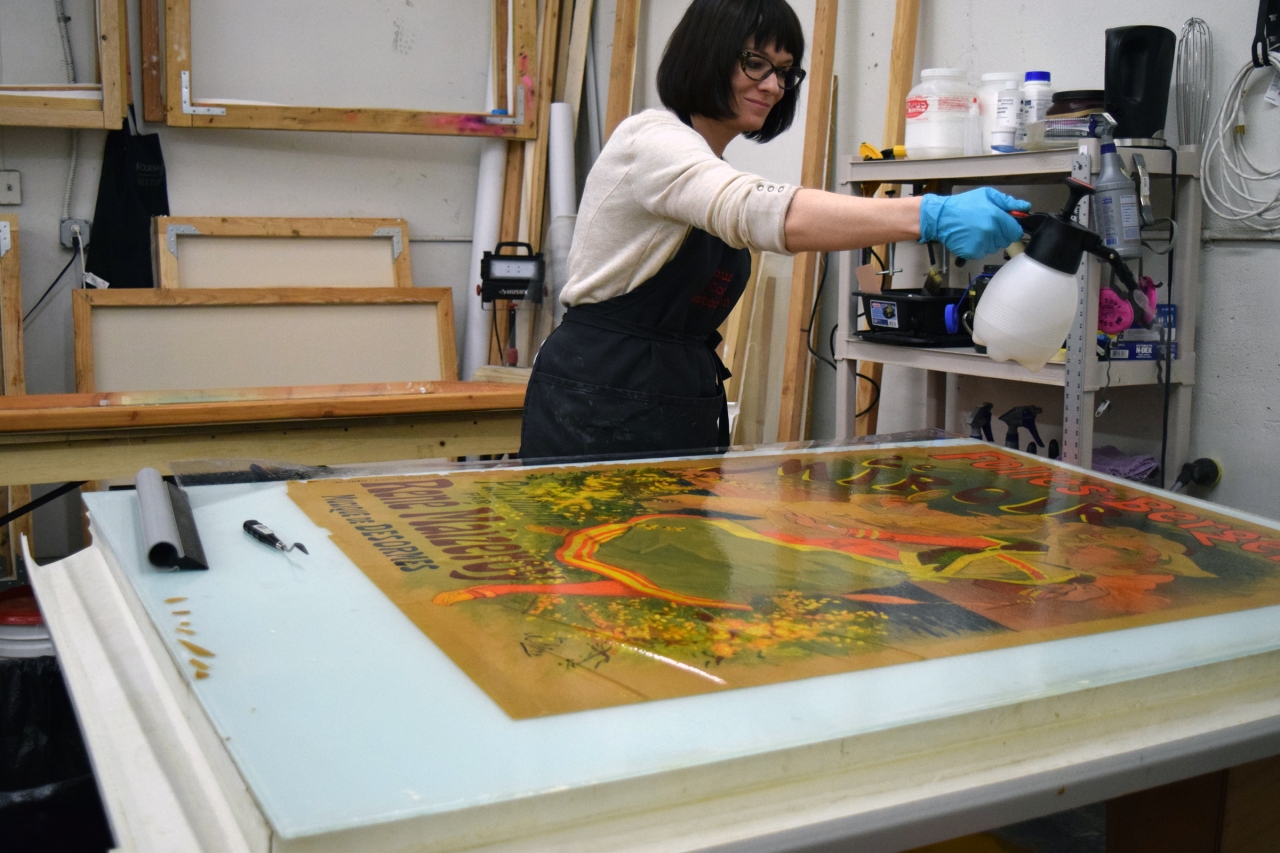 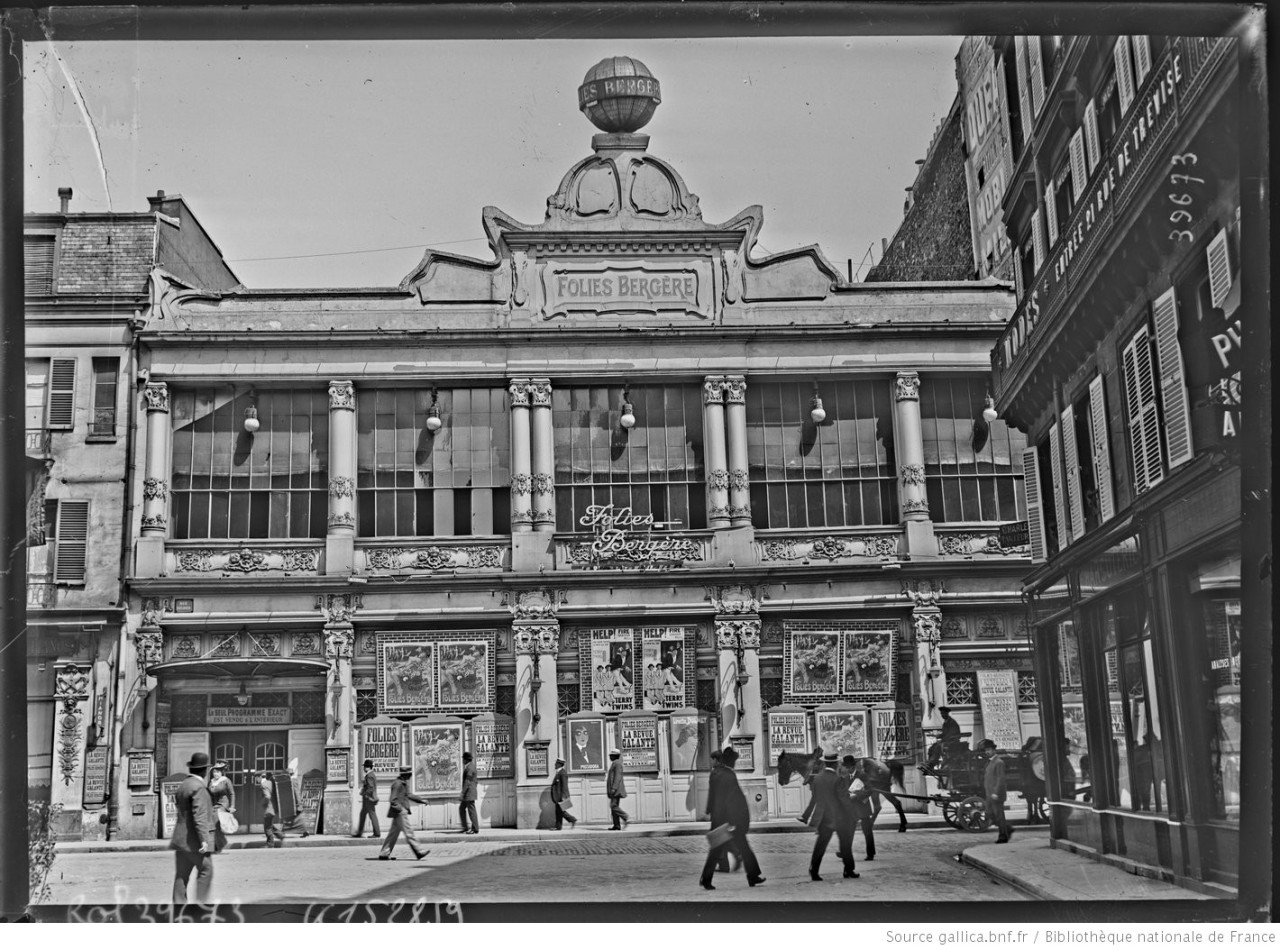 L’arc en Ciel, 1893, before linen backing. This poster was not previously mounted on linen. 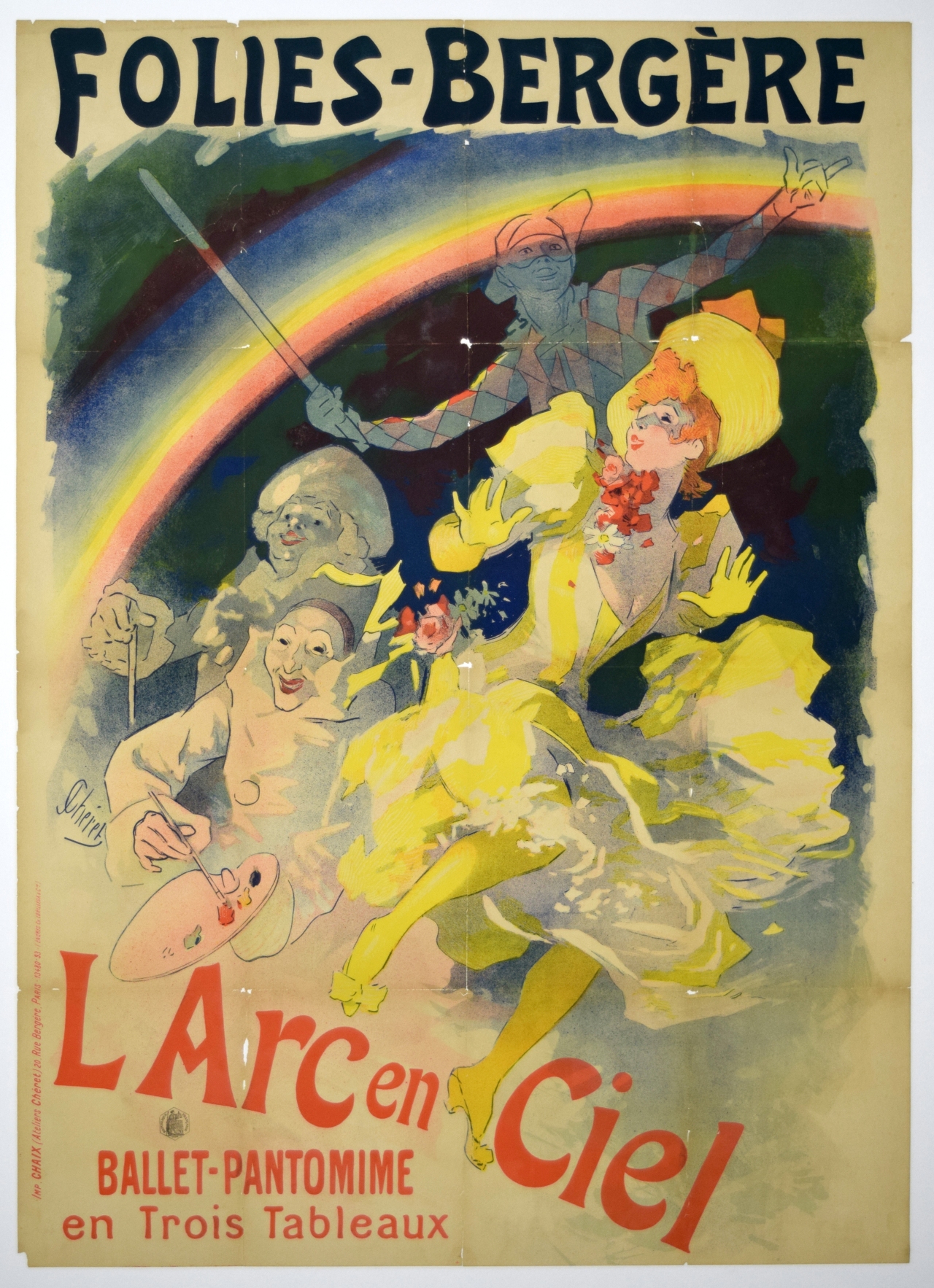 After linen backing and a light bleaching treatment. You can see that some of the brown discoloration along the fold lines has been lightened. 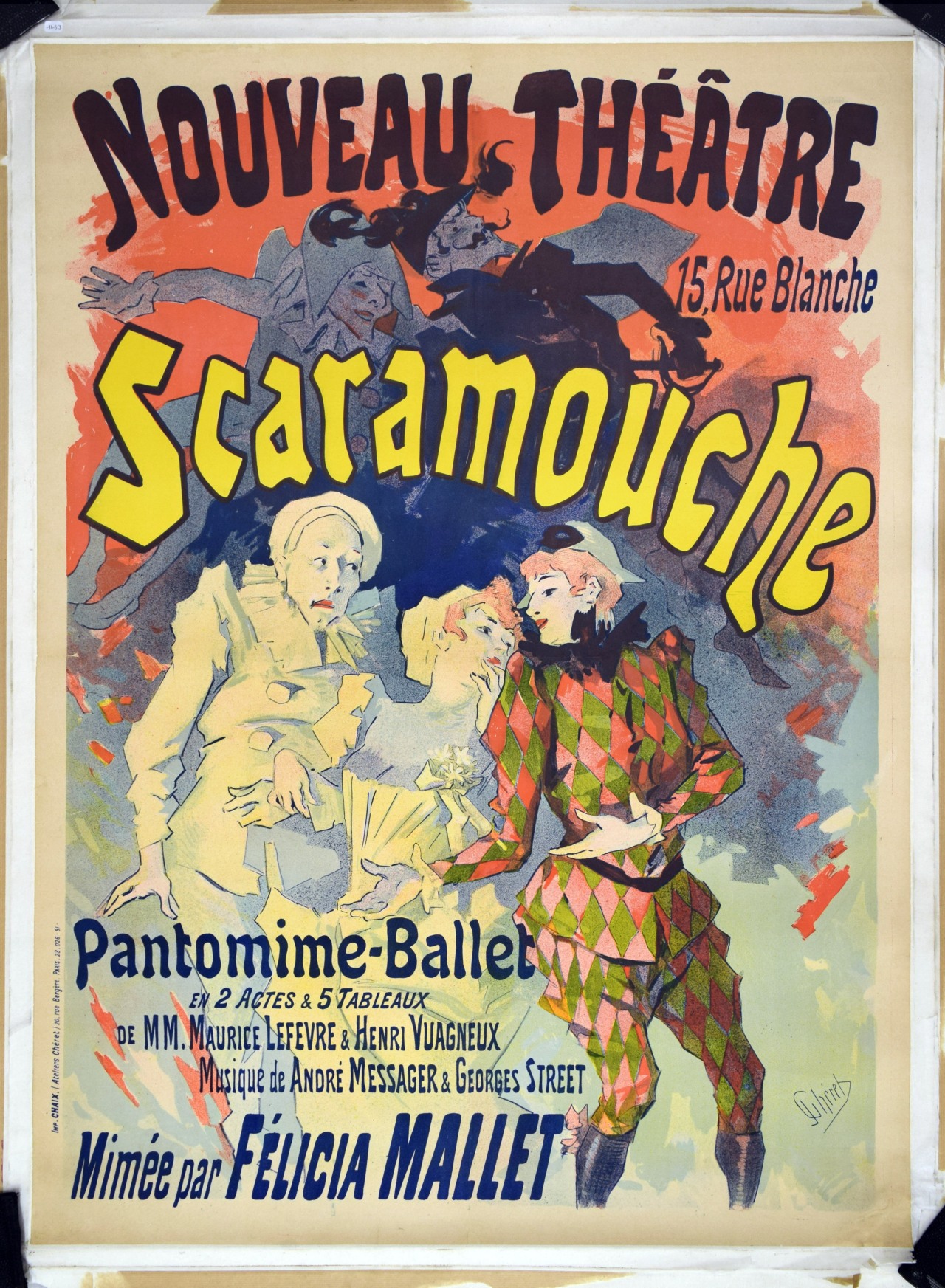 This poster from 1891, for the production of Scaramouche at the Nouveau Theatre, was previously backed. The materials used for the backing were unusual, and the job was probably done in France.

Here’s Katie removing some of that unusual previous backing. The poster is lying face down and had been thoroughly saturated with water.

Here is the poster after the previous backing has been removed, and it has been put on new linen. Some previously restored damage has now become visible in the margins. 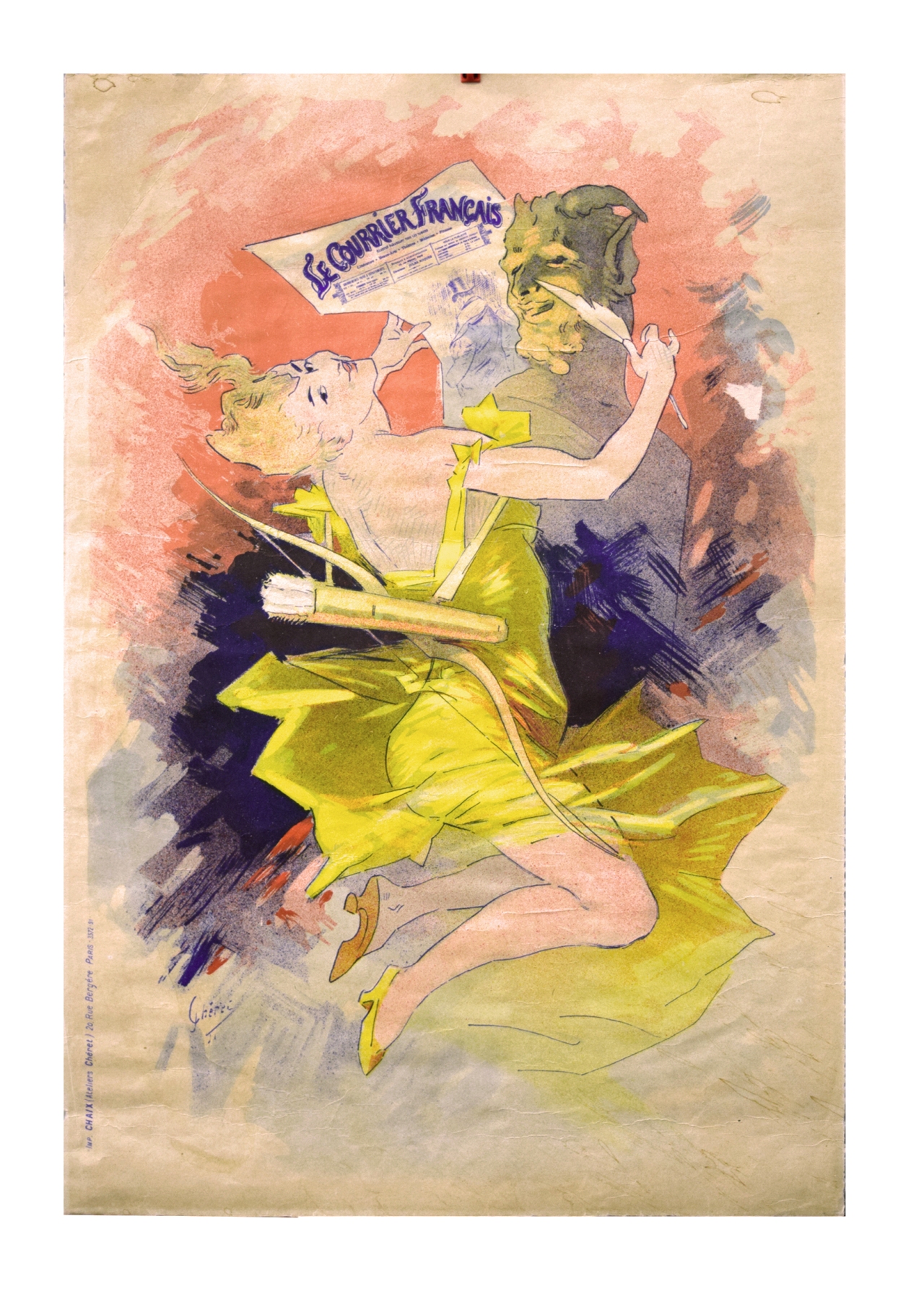 Le Courrier Française, 1891. This poster had been previously backed, with extensive previous restoration.

The previous restoration washed away after the re-lining process, and here is how it appeared after the new backing.

Melissa performs restoration to the missing paper, discoloration, and tears. 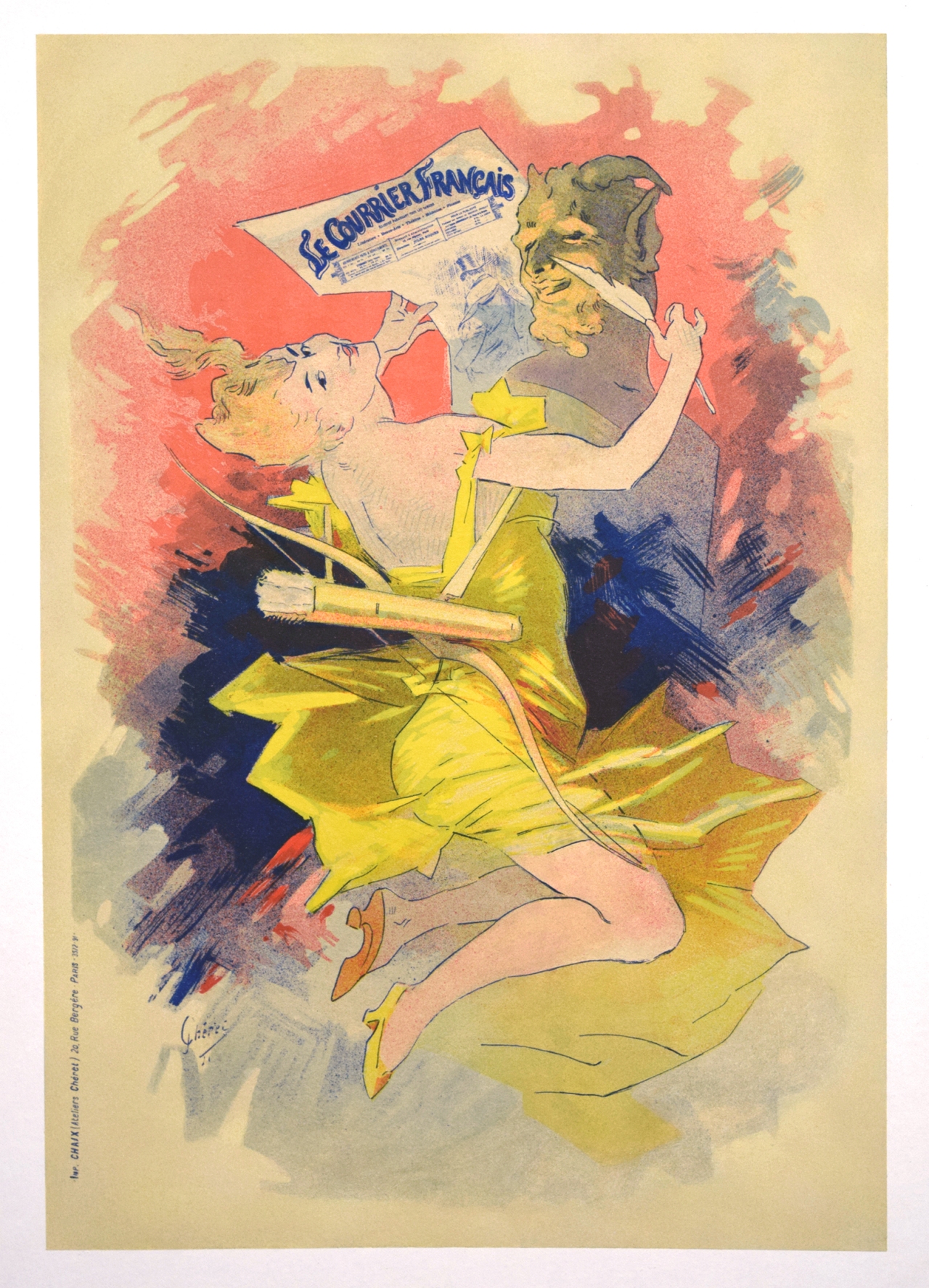 After restoration. Nice and clean! 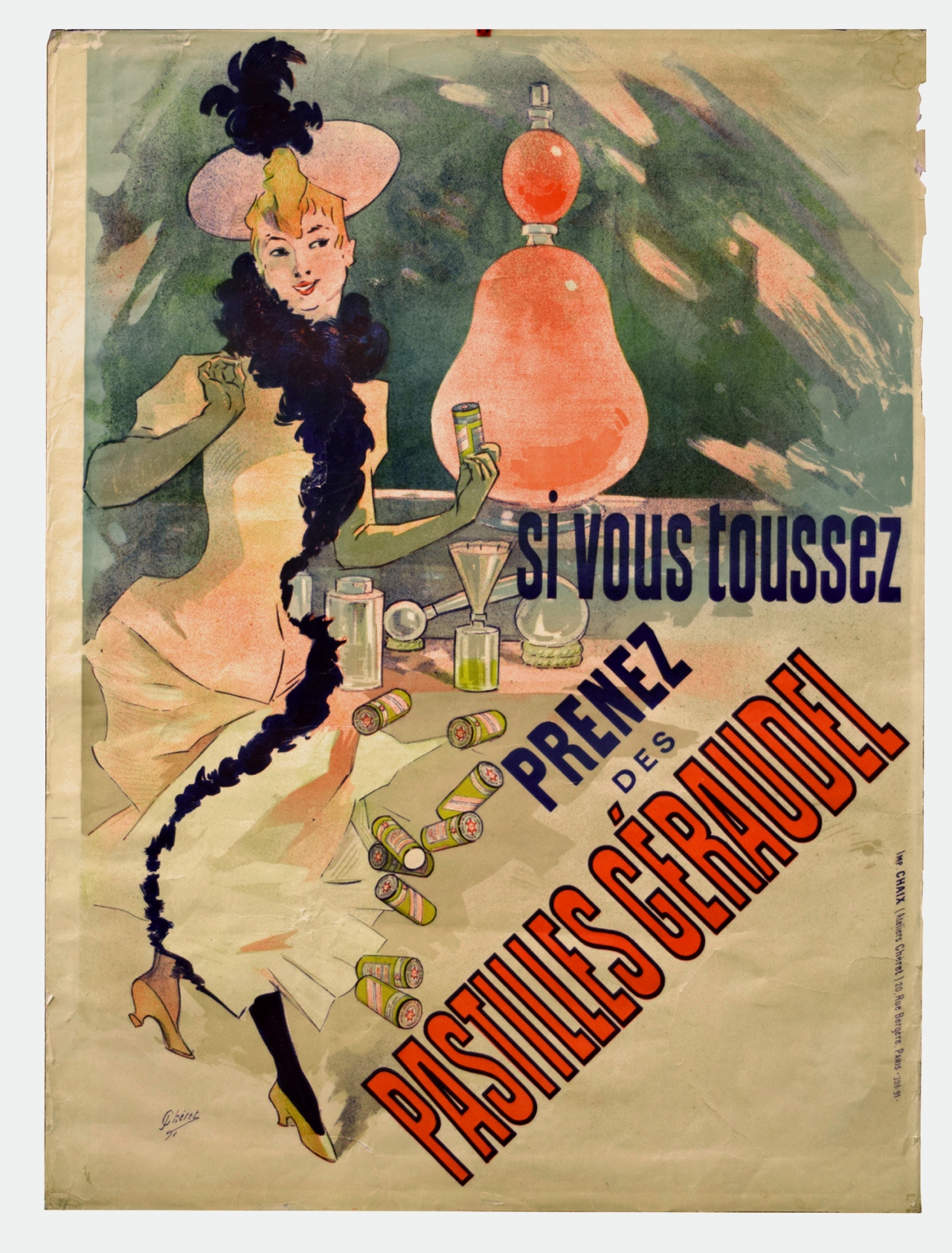 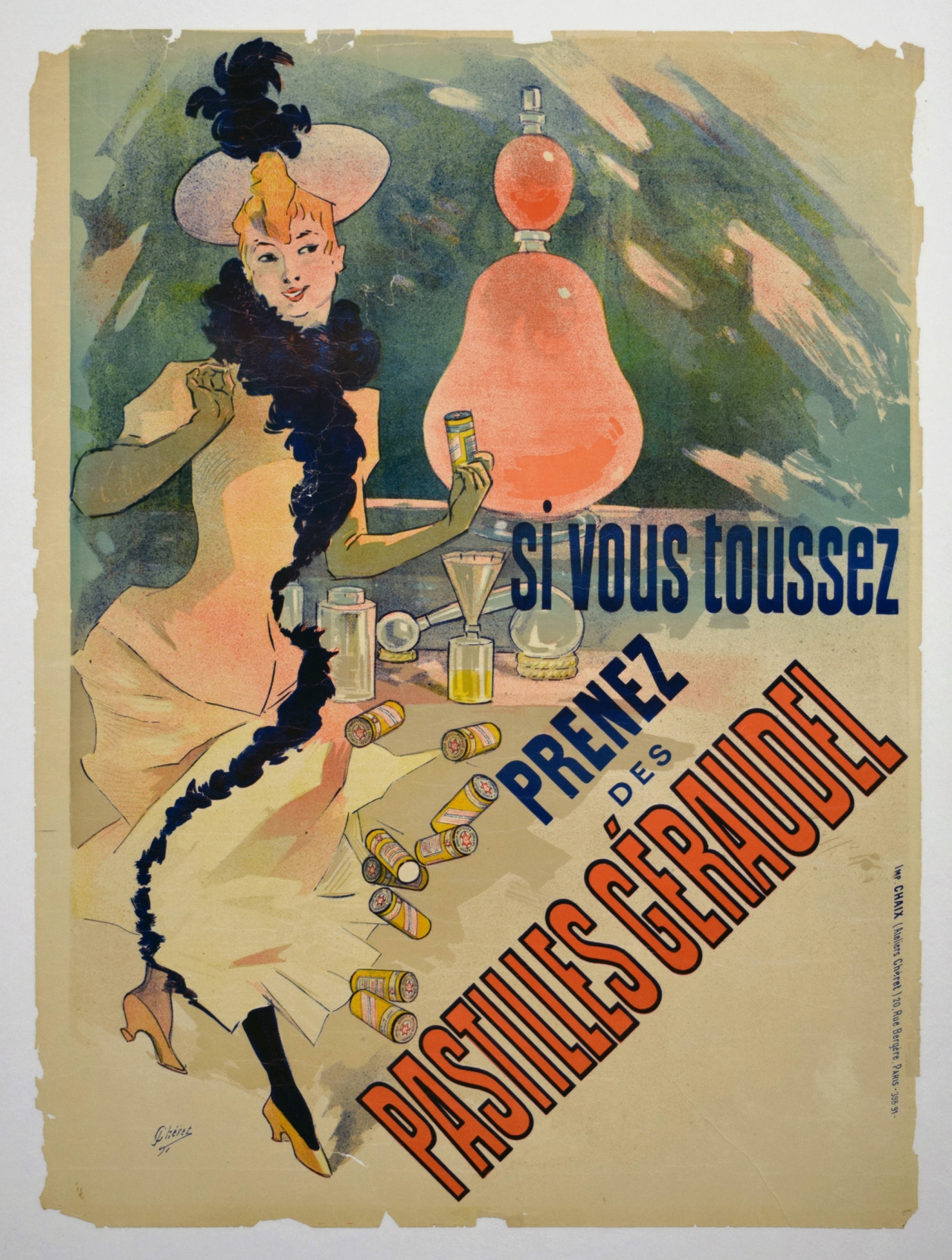 The poster after bleaching, cleaning, and linen backing.

A different ad for Pastilles Geraudel by Chéret, 1896, can be seen in the vintage photo of the Paris street scene below. Bibliotheque Nationale de France, Public Domain 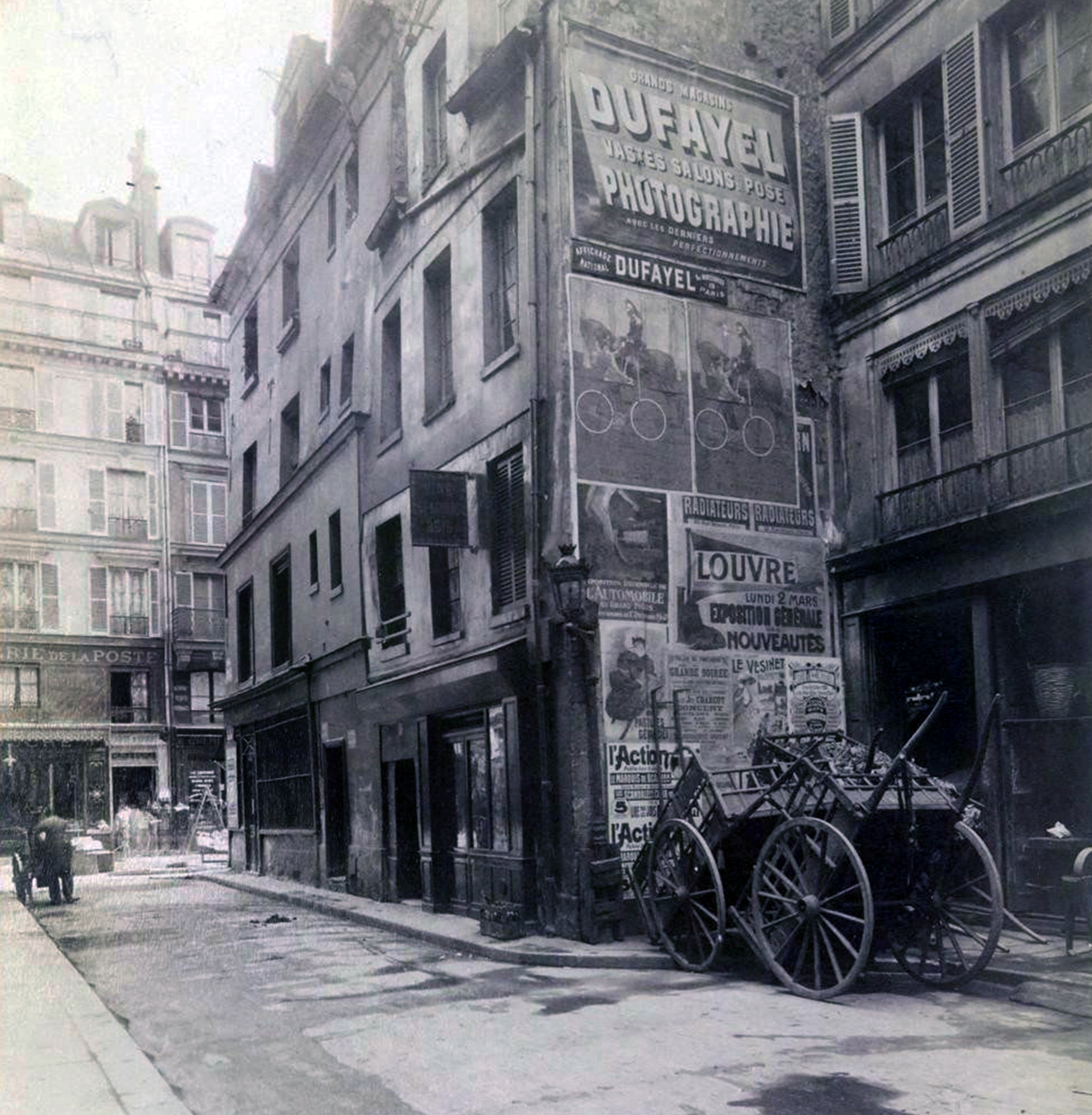 A photo by Atget, 1908, of a Paris street scene on the Rue du Plat d’Etain, featuring a Pastilles Geraudel poster just above the handcarts. Bibliotheque Nationale de France, Public Domain