My husband and I watched Akira Kurosawa‘s 1954 epic film Seven Samurai for the first time the other night. Friends had recommended it in the past, but we don’t often feel like sitting down for a black and white, subtitled, 208 minute movie. It’s just never the right time.

We tackled it on an ambitious day and were transfixed. It’s an adventure movie, really entertaining above all. The costumes are gorgeous; dignified warriors stalking around with topknots and beautifully patterned robes with sashes, armor, and swords. The characters are relatable and they translate to the here and now. Everyone knows someone like these people; earnest youthful hero worshipper, extroverted party animal, stolid techie, etc.

The epic story felt familiar, and I discovered it was remade into an American Western in 1960 (The Magnificent Seven), which was in turn remade into a comedy that I loved as a child in the 80’s: Three Amigos, starring Steve Martin, Chevy Chase and Martin Short.

Kurosawa was a big influence on George Lucas, and one of the immediately obvious similarities you’ll notice between Seven Samurai and Star Wars is the directors’ odd predilection for wipes, or the transition when one shot replaces another by traveling across the frame. Today a wipe looks goofy but in the 50’s it was experimental.

There are a lot of moments throughout Seven Samurai when you get the sense that Kurosawa is playing with the medium, and however clumsy it looks by today’s standards, his tools are still powerful. His famous use of slow motion is first demonstrated when a crowd of villagers watches as the ronin, Kambei, recues a hostage child from a thief. The thief collapses and dies in slow motion, sending up a cloud of dust, but the crowd’s reactions are shown in real time.

We both liked the movie so much that I bought this poster off eBay, and was later pleasantly surprised to find the seller was Posteritati.

Posteritati, a movie poster gallery with a storefront in NYC, was how I got my start in poster restoration. A friend who worked there kept telling me to get into linen backing and restoration, that it’d be my ideal job. Eventually she gave me a reference and I’ve been doing it ever since.

Anyway my new/old Seven Samurai poster had heavy fold lines and tape on the back along the folds and edges. This is not unusual for a vintage poster. The masking tape had been on there for quite a while and had managed to calcify and seep into the paper, creating brown stains on the front. It would have to be removed before the real work could begin.

Seven Samurai verso (back) with tape. 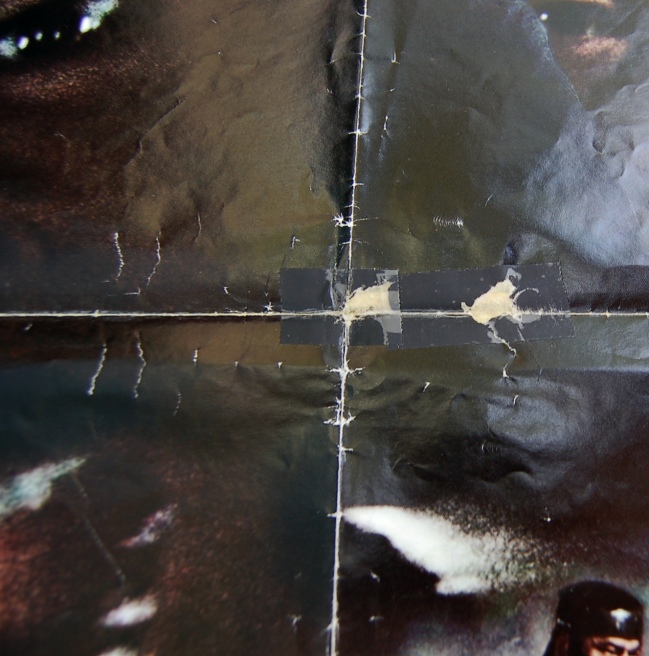 There were also a few pieces of scotch tape on the front.

All this can be quickly taken care of with some tools and a solvent.

After the tape was safely removed I washed the poster and gave it a light bleach in order to brighten up the paper and ink. I then linen backed it, airbrushed a few stray tape stains, and then restored the fold lines. A very simple, easy project with dramatic results.